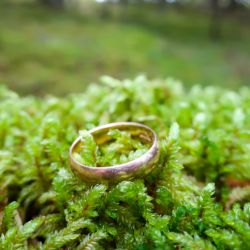 Desperate Search for the Lost

We tore the sheets off the bed, shined flashlights under tables and chairs, even dug through the kitchen silverware drawers looking for one of our most valuable possessions. It seemed to have vanished. Not more than thirty minutes earlier, my husband Jim held his left hand up to show me his loose wedding ring and then turned his fingers toward the floor. I watched the band slide off his finger and into the palm of his other hand. “You might want to get that sized,” I said. He responded, “It’ll be tight in the morning.” In that moment, I let go of my plan to make the appointment at the jewelers. Now that the ring had disappeared, I wanted to spew all kinds of good advice and a list of “I told you so’s.” I held my tongue. We were desperate as we searched for the valuable possession we misplaced.

We anguished over the lost ring for two hours, retracing our steps, rethinking our movements, reviewing the trash in the cans with a fine-toothed comb. We came up empty handed. After two hours, we decided the search was in vain, so we went to bed. Holding hands in prayer as we lay next to each other, we cried out to God for His help. We asked for His eyes to see and to give us the understanding to discover where the ring might have fallen.

Our search for the lost wedding band was urgent and imminent. Although there were only two of us, Jim and I made a small but mighty search party. I was consoled by the fact that the wedding band could be replaced. I didn’t want to think about it, but it was true.

And then I remembered those on my prayer list who are away from God, some by choice and others who have not yet heard the gospel. They were lost, spiritually separated from the One who can give them peace, hope and security. I was reminded about El Roi, the God who sees, my compassionate, loving Heavenly Father who continues to seek out lost people. In much the same ways as we searched for our lost wedding band, I envisioned God frantically seeking those who do not know him.

I envisioned God frantically seeking those who do not know him.

How are we searching for the lost? Looking at Jonah 1:2, 3 we see a possible response in God’s request to Jonah: “Go to the city of Nineveh and preach … but Jonah ran away.” God commissioned him to the Assyrian capital of Nineveh. At first unwilling to make the journey northeast to deliver God’s message, Jonah turned and aimed for the west – the farthest city opposite of Nineveh—Tarshish; located in modern-day Spain. Jonah did not want to be sent to the Assyrians, he made an excuse to God, “Not me.” When the call of God came to him, Jonah could not see beyond his own selfish desire for God to punish the Assyrians. Jonah was not willing, but he was also not yet prepared to share God’s message. Before Jonah could relay God’s message, he had to be broken. He had to learn a personal lesson about God’s mercy.

How are we searching for the lost?

Through his flight to Tarshish, his shipwreck, and his time in the great fish, Jonah was convinced in a powerful way that all salvation comes from the Lord (Jonah 2:9). Only God decides where to pour out His salvation and mercy (Jonah 4:11).

Consider Jonah’s hesitancy since the Assyrian empire was the largest empire yet seen in the world; and it got there using a new military weapon: terror. The Assyrian army was notorious for its brutality, and the Assyrians themselves made sure their enemies knew about their reputation. Their powerful bows, battering rams, and archers were effective; but mutilation of prisoners, resettlement of whole populations, and a general rejoicing in butchery were what their victims described. History records and the book of Jonah describes Nineveh as a wicked city worthy of destruction.

Jonah obeyed the word of the Lord and went to Nineveh (Jonah 3:1). While Jonah eventually departed and proclaimed God’s message, the lesson of his story does not end there. When Jonah finally obeyed God and preached to the Ninevites of their coming destruction, they responded by fasting and repentance. As a result, God spared the city. As we ask God to give us a heart for the lost, we must continue to let God’s love compel us to desperately seek the lost. God wanted Jonah’s actions and his heart. He wants ours as well.

My husband, awake in the night, retracing his steps before he noticed the ring had come off his finger, remembered adjusting a blanket on the couch. The next morning, Jim mentioned the spot where he thought the ring might be. I ran into the living room, slowly, gently pulled the blanket out of the cushions. The ring was there, like a pearl inside of a clam, safe and sound. We rejoiced that the lost had been found.

I am sure our joy was nothing compared to the joy God has for the one lost sinner who is found.

“How can they believe in the one of whom they have not heard? And how can they hear without someone preaching? And how can they preach unless they are sent? As it is written, How beautiful are the feet of those who bring good news.” (Romans 10:14,15)

This blog first appeared January 2019 in Lead Like Jesus

Jehovah Shammah – The God Who is There